Last week we learned that a marketing start-up Renew has been trialling the use of tracking technology on the streets of London – through wifi enabled recycling bins.

The news of this activity caused quite a stir, to the point that within a few days, the City of London Corporation, the local government body, ordered the data collection via city of London bins to stop just a few days later, and asked the Information Commissioners Office, the UK’s privacy regulator, to investigate a potential breach of the law. See also this story on the BBC: City of London calls halt to smartphone tracking bins.

However, the question of the legality of the activity is only part of the story, what is perhaps more interesting is the potential for reputational damage that results from such covert tracking activity.

These hi-tech, internet connected rubbish bins were using technology from another company Presence Orb to capture the unique MAC address of the smartphones, or other similar devices with wi-fi enabled, belonging to passers-by in selected streets in the City of London. 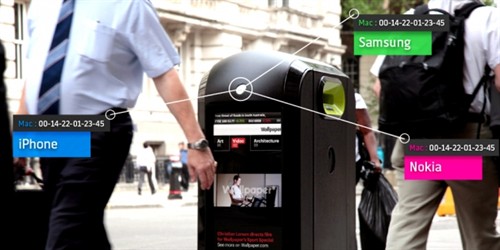 The idea behind this technology is to be able track the movements of people in the real world through the devices they carry, to create profiles of these people, and use these for highly targeted marketing.

The Renew bins have electronic billboards which are sold as digital advertising spaces.  There is a clear advantage to the advertiser if they can detect when someone is walking by, match their device’s MAC address with a customer profile, and serve up a relevant advert or offer.

Renew has insisted that is was only trialling the technology, and that data collected was aggregated and anonymised, however, a quote from Renew, posted on the Presence Orb website as a testimonial speaks volumes about where they see this technology going in the future:

“The consolidated data of the beta testing highlights the significance of the Renew ORB technology as a powerful tool for corporate clients and retailers. It provides an unparalleled insight …”

The reaction from the general public, and most commentators, has been almost universally condemning of this covert style of tracking.

What is really very interesting about this however, is that this type of tracking has been happening on the web for years, and the cookie law was designed to both bring this activity to people’s attention, and enable them to do something about it.

It is no coincidence that the strapline on the Presence Orb website describes the technology as “A cookie for the real world“.

The reaction to these smartphone tracking bins shows that concerns about privacy and the ability to prevent intrusive tracking are more prevalent in society now than ever before.

We will not know for some time if the ICO will consider these real world tracking devices as in breach of the cookie regulations or the wider Data Protection Act.  Likely their investigation ICO will hinge on the absence of any attempt to notify or gain consent from members of the public whose data was captured.

However, what is clear right now is that there is significant business and reputational risk from not being transparent about tracking people in their daily lives.

It may have been a ‘real world’ story this time, but as people increasingly spend as much of their time in an ‘internet world’, their concerns about privacy tracking span both domains, and the company that fails to recognise and address these runs the risk of alienating their customers.